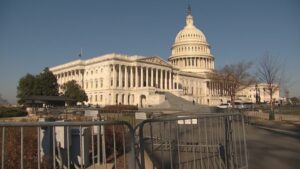 WASHINGTON, D.C. (NBC News) – The FBI is warning police departments in state capitols across the country to prepare for violence ahead of President-elect Joe Biden’s inauguration. They’re being told to prepare for armed protests starting this weekend.

“We continue to gather intelligence that will aid in our ability to disrupt future violent activity,” the FBI’s Steven D’Antuono said Tuesday.

Security official’s warned Democratic members of the House Monday about specific threats to the Capitol surrounding the inauguration.

One member on the call said it was “chilling and horrific.”

President Trump, meanwhile, is still taking no responsibility for inciting last week’s riot with his address to supporters but is calling for calm for the inauguration.

For the inauguration, there will be a tight perimeter around the Capitol with thousands of police and National Guard on the streets.

“The insurrectionists who breached the U.S. Capitol fall under the definition of threats to the homeland and should be added immediately to the TSA no-fly list,” Schumer said.