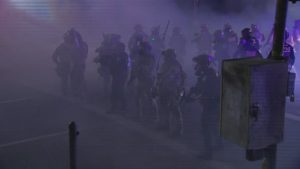 PORTLAND, Ore. (NBC) – Federal law enforcement agents and protesters squared off for another night of demonstrations in Portland Thursday night.

For more than 50 nights, hundreds of protesters have gathered in the Rose City overnight to protest.

Protesters are clashing with federal officers who have been sent by the Trump administration into Portland over the past week to end the violence.

Federal troops used tear gas and other crowd-control munitions against protesters after some launched fireworks at the federal courthouse.

On Thursday, a federal judge blocked U.S. agents from arresting or using physical force against journalists and legal observers.