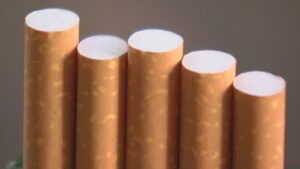 The Food and Drug Administration announced Thursday its plan to propose regulations banning Menthol flavoring from cigarettes and to remove menthol and fruity flavors from small cigars.

Anti-smoking advocates say menthol masks the true taste of cigarettes, making it easier to start smoking and harder to quit.

Menthol and flavored tobacco products are favored by younger people and in communities of color, according to the FDA.

The new regulations are expected in the coming year.

Also expected is a major pushback from the tobacco industry, which has quashed earlier efforts to ban menthol flavoring.

Surgeon General Vice Admiral Vivek Murthy, speaking on MSNBC, said the move is necessary to save lives. “While some of the numbers have improved we still have millions of children in our country who are using these tobacco products and flavors are a critical reason why,” Murthy said. “And so we continue to need to take more action on the cigarettes front. But today, overall, is an important step forward in reducing the overall challenge that we face with, with tobacco-related disease.”

The FDA hopes this move will reduce youth initiation and tobacco addiction, address health disparities in communities of color, and curb deaths.