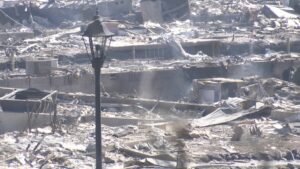 ASHLAND, Ore. — At least 50 people were reportedly missing initially from the Almeda Fire.

Jackson County Sheriff Nathan Sickler says that number is currently down to zero for people who are considered ‘critically missing.’

That means someone who is reported missing and was living in a fire zone.

However, he says that number could change at any time.

“The reference of getting a report of a missing person. It’s then the analyst and detective work to exhaust all means to find them through associates, family members, other addresses, phone numbers,” said Sheriff Sickler.

Aside from the zero critically missing people, Sheriff Sickler says there are 10 ‘unconfirmed missing’ people, which means the person was not necessarily in a fire zone at the time of a fire.

Sheriff Sickler says if you were in the area at the time of the fire, you should fill out a form online saying you’re now safe and sound.

If you know someone who is missing, fill out the form on the sheriff’s office Facebook page.