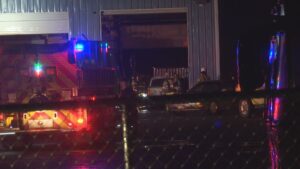 EAGLE POINT, Ore. – It was a busy scene at the bus barn in Eagle Point Thursday night.

Shortly before 10 p.m., multiple firefighting vehicles and at least one law enforcement vehicle were spotted at the Jackson County School District 9 Transportation facility. It’s located along the 12-thousand block of Highway 62.

We are awaiting further information from the responding agencies. NBC5 News will update you as soon as more details are released.