Klamath County, Ore. – A wildfire burning near Klamath Falls is prompting evacuations, according to fire officials.

Nearby businesses including IQOR and ESI have been evacuated along with homes on Flowers Lane and Wocus Road.

No structures have been lost.

Highway 97 remains open for now, but firefighters are encouraging the public to avoid the area. 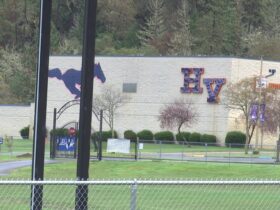