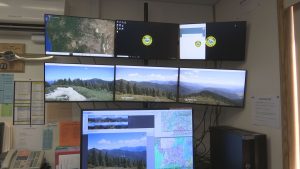 CENTRAL POINT, Ore. — This weekend’s increased risk of lightning storms has the Oregon Department of Forestry on high alert.

The agency’s Southwest Oregon District said its staff is on board and their mountaintop detection cameras are up and running. ODF said the forecast does have a decent chance for rain, they’re still preparing for otherwise.

“We don’t go to the bank on that,” said ODF Public Information Officer Brian Ballou. “We will wait and see what this storm brings us and if there’s fires, we’ll go and get ’em.”

ODF said they’re anticipating some fires out of this weekend’s storms. It’s also hoping for some rain to help them out.