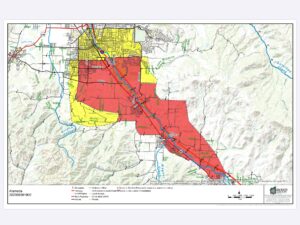 ASHLAND, Ore. – Crews are tackling a fast-moving fire that started in the City of Ashland, burned through Talent, Phoenix, and into parts of Medford. The fire has been officially named the Glendower fire, but has also been referred to as the Almeda fire, because it started near Glendower Street & Almeda Drive in Ashland, Oregon.

Interactive evacuation level map (please note, it may take some time for all of the map layers to load):
This includes evacuations for both the Glendower/Almeda fire and the Obenchain fire burning near Eagle Point.

Update 11:00 pm Tuesday: officials said the north Medford Area is now at Level 1 (be ready). The area includes McAndrews Road to the south; Oregon 99 to the west; Beall Lane to the north; Interstate 5 to the east.

Update 10:20 pm Tuesday: ODOT provided the following I-5 traffic update: “All lanes are open in the Rogue Valley. All interstate closures have been lifted. Exits 24 Phoenix and 21 Talent remain closed. Please use caution when driving through the area. Oregon 99 remains closed between south Medford (Garfield Street) and South Valley View Road Ashland due to on-going fire activity.”

Update 8:20 pm Tuesday: Jackson County Emergency Services gave the following evacuation update for Medford: “The City of Medford issued the following evacuation notifications at about 8:45 p.m. Tuesday: “Level 2 (get ready) evacuations are now in place for the area bounded by North Phoenix Road on the east; to McAndrews on the north to Lozier Lane; to Columbus Avenue on the West out to Oak Grove: Oak Grove to Hull Road; Hull Road to South Stage Road; South Stage Road to Griffin Creek Road; and Griffin Creek Road to Griffin Lane. Everyone within this boundary is now at Level 2 and should get ready to leave immediately. A temporary evacuation point has been established at the Jackson County Expo, sheltering is not available.”

Update 5:00 pm Tuesday: an immediate evacuation notice was issued for all Phoenix-area residents. This includes all properties between I-5, north to Voorhees Road, west to Coleman Road, and south to Pioneer and Culver Road. An evacuation shelter has been set up at the Expo.

Update 4:40 pm Tuesday: the sheriff’s office said issued a Level 2 (be set) evacuation notice south of Barnett Road. A Level 3 (Go!) evacuation notice was issued south of Glenwood and Campbell on North Phoenix Road. The notices could change due to erratic fire and weather behavior.

Update 1:00 pm Tuesday: the City of Ashland said there were no evacuations necessary within city limits.

The Almeda Fire, also known as the Glendower Fire, is moving mostly north along the Bear Creek Greenway. By about 3:30 Tuesday, parts of the City of Phoenix were being evacuated as the fire reached an estimated 1,000 acres.

Update 11:30 am Tuesday: The following Nixle alert was sent out: “There is a grass fire near Almeda Drive in Quiet Village. Those in the area and should consider evacuating and avoid the area.”

That alert was followed by: “Wildfire near Bear Creek, evacuate all homes near fire from Michelle St west to lower Cambridge St”

This a breaking news story. NBC5 News has reporters headed to the scene. This article will be updated when more information becomes available.