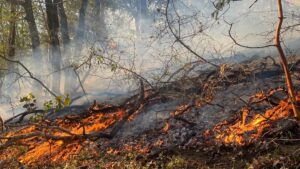 JACKSON COUNTY, Ore. — Multiple burn piles are being cited as the source of a wildfire that burned near Rogue River.

The Oregon Department of Forestry’s Southwest Oregon District said the Wards Creek Road Fire was reported on the evening of Tuesday, April 6 in the hills northeast of Rogue River.

The fire was only a few acres when crews first arrived. However, it was pushed by wind and eventually grew to eight acres before being contained with the help of numerous local fire agencies.

Following an investigation, ODF determined the cause of the fire was multiple escaped debris burns that were left unattended. A citation was reportedly issued to the responsible party.

In the wake of the fire, ODF is reminding southern Oregonians about the dangers of debris burning.