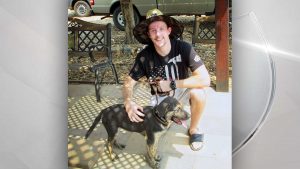 SISKIYOU COUNTY, Calif. – A firefighter who sustained severe burns fighting the Klamathon Fire in northern California adopted a dog who was displaced by the very same fire he fought.

Brandon Feller was actively fighting the flames in Siskiyou County on July 5th when his engine was burned over and he sustained severe burns to his face.

According to a GoFundMe page set-up to support Feller, “Brandon was flown to UC Davis ICU Burn Center. He has been admitted here since the incident. He is recovering well, considering the injuries. The medical team has been incredible and amazed by the rate of recovery Brandon is making. CalFire has been nothing but amazing and supportive and we are overwhelmed by the brotherhood and support services they have provided.

“Brandon’s recovery will limit his ability to return to his normal overtime schedule this fire season. As a firefighter, overtime is where he makes a significant amount of his income. My goal is to help raise funds for Brandon to assist him with personal expenses and bills to cover the year. His income will be significantly affected by this incident and any support will help. We are grateful for all the love and well wishes being sent this way.”

CAL FIRE said Feller’s “spirits are high”, and says doctors have reported he is doing exceptionally well considering his injuries.

Eventually, Feller felt well enough to visit dogs displaced by the Klamathon Fire at Yreka’s Rescue Ranch. “He immediately made a strong connection with Rookie, a pup whose family had also been displaced by the fire and needing a new family,” the animal rescue organization said. “The Rescue Ranch felt that the match was an opportunity for both Feller and Rookie to heal together over the coming months, and build a close relationship for a lifetime and waived their normal adoption fee as a thank you to Feller for his brave service.”