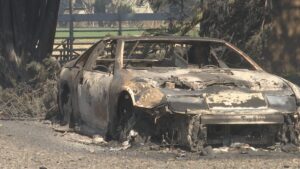 JACKSON COUNTY, Ore. — Four people are confirmed dead in the damage from the Almeda Fire, according to Jackson County Sheriff Nathan Sickler.

Sheriff Sickler made the announced during a press conference Saturday. It was originally said there was five total deaths, but with forensic specialists, one set of remains was determined to not be human. The identities of the victims have not yet been released.

One body was found on the day the fire started. Four more victims were discovered during the last three days. The investigation is ongoing.

The Almeda Fire is 50% contained with minimal growth, according to the State Fire Marshall’s Office.

The fire started Tuesday afternoon in north Ashland. It quickly spread along the Bear Creek Greenway north toward Talent and Phoenix. At last report, 600 homes and 100 businesses were destroyed. There are still 16,163 homes still threatened. The incident management teams says roughly 42,000 people have been affected by the Almeda Fire.

Much of Talent and Phoenix are still under evacuation orders. For a full map visit: https://jcgis.maps.arcgis.com/apps/webappviewer/index.html?id=3caa39804db54631a61007180d5ef415