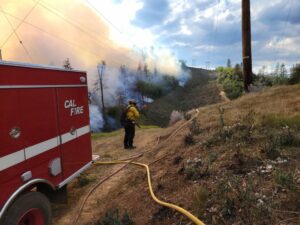 Cal Fire said that around one hundred firefighters are on the scene.

The fire is located west of Shasta lake city in Shasta County, and has already burned 88 acres.

Cal Fire says that as of noon today the fire was 60 percent contained.

No homes were lost and so far no one has been injured at the time.

Cal Fire’s website says the cause is unknown, but multiple reports say it began from an out-of-control Cal Fire burn pile.