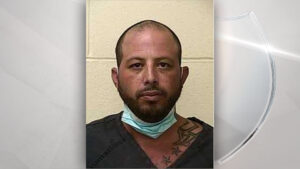 The Grants Pass Department of Public Safety said at about 2:30 a.m. on November 6, officers pulled over a white 2015 Jaguar for minor traffic violations on Southwest 6th Street near Southwest K Street. However, the traffic stop didn’t last long and the Jaguar sped away, leading officers on a pursuit.

Eventually, the Jaguar crashed into a power pole at the corner of Southwest L Street and Southwest 4th Street. The driver, later identified as 38-year-old Florida resident Joseph Doyle, fled the scene on foot.

Officers said they found 40 pounds of marijuana in the crashed Jaguar.

Police searched the area and used a K9 unit to track Doyle to a home on Southwest Burgess Street where he was found hiding the backyard.

Doyle was arrested and lodged in the Josephine County Jail for numerous charges, including attempting to elude and unlawful possession, manufacture, and delivery of marijuana. He also had a Florida warrant for heroin trafficking, police said.