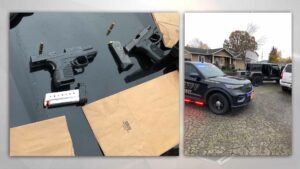 Around 4 p.m. Monday, deputies said they tried to pull over a Jeep Wrangler for an equipment violation, but the driver wouldn’t stop, ran red lights and continued driving recklessly trying to get away. Deputies used spike strips to deflate the tires and eventually the driver stopped about two miles away. The driver and five passengers ran from the car.

Deputies located and arrested all six people and recovered two stolen handguns. Inside the car, which deputies learned had been reported stolen from Tualatin a few days prior, deputies found an AR-15 style rifle, meth and cash. Deputies also found evidence linking the group to burglaries of multiple stores in Camas that happened Sunday morning.