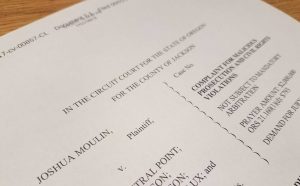 Josh Moulin filed the lawsuit last month. NBC5 news is just starting to dig into this lawsuit. This is what we know so far:

Josh Moulin was a lieutenant with the Central Point Police Department and commander of the Southern Oregon High Tech Crimes Task Force.

But in 2012 he was put on paid administrative leave, while an internal investigation looked into his management of the task force. A laptop computer was involved. The Department of Justice filed two charges against him involving computer crimes.

Those charges were ultimately dropped. A Jackson County Judge dismissed the case saying investigators didn’t follow proper policies in handling the laptop and any evidence they wanted to use from the device.

Now, Moulin is suing, saying the case against him was “unfounded and politically motivated.”

He goes on to say the case ended his career in law enforcement, damaged his reputation and caused damage, pain and suffering.

The lawsuit also claims Moulin had to liquidate his Public Employees Retirement System account to pay for his defense.

Those are just the basics of the case.

In the filing, Moulin says the case against him was “motivated by office politics and rivalries.”

He also says Central Point Police Chief Kristine Allison was concerned by his achievements in law enforcement and eager to find a scapegoat for the unsolved murder of David Grubbs in Ashland, a case Moulin had assisted on.

NBC5 News is reaching out to the defendants in this case and will bring you their response when we receive one.

The following is a response to recent litigation filed by attorney Steve Kraemer who represents the City of Central Point and city employees:

During the past day or two there has been substantial media coverage of the allegations made by Josh Moulin in his recently filed lawsuit.

Prior to filing the lawsuit, Mr. Moulin’s criminal attorney obtained an order in Jackson County Circuit court sealing all records generated as part of the underlying investigation.  For the City to respond to the recent allegations, beyond a denial, would risk violating the terms of the Order, for which sanctions could be imposed by the Court.

By the terms of the Order, it does not apply to Mr. Moulin or his attorneys.

The City’s attorney has asked Mr. Moulin’s attorneys to ask the Circuit court for an order to unseal the records, most of which would otherwise likely be public records.  They have declined this request to ask the court to unseal the records, unless they are released pursuant to a protective order which would probably still prohibit the City from commenting on the contents of the documents.

In the meantime, you can read the case documents HERE.