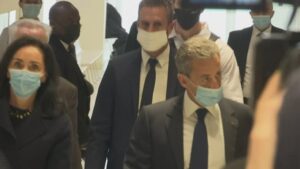 The 66-year-old politician was sentenced to one year in prison and a two-year suspended sentence.

Sarkozy was president from 2007 to 2012 and during that time was convicted of trying to illegally obtain information from a judge about an investigation into his campaign finances.

The court said Sarkozy, as a former lawyer, was quote “perfectly informed” end quote that he was committing an illegal act.

Two co-defendants were also found guilty and given the same sentences.

The court said Sarkozy can request to serve his sentence at his home wearing an electronic monitor.

He has ten days to appeal the ruling.

Sarkozy faces another trial later this month along with 13 others on charges of illegal financing of his 2012 presidential campaign.

He’s the second former president in modern France, after the late Jacques Chirac, to be convicted of corruption.