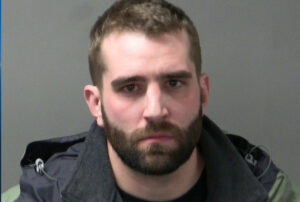 KLAMATH FALLS, Ore. – A former Klamath Falls police officer pleaded guilty to federal charges after being accused of stealing drugs from an evidence room before crashing his vehicle.

Shortly after Reif removed the drugs from the department, he overdosed and got into a multi-vehicle crash while driving his patrol car, investigators said. He was revived and taken to the hospital.

According to the DOJ, toxicology reports revealed Reif was under the influence of methamphetamine and fentanyl.

After the crash, investigators searched Reif’s locker at the police department and reportedly found an evidence bag containing methamphetamine.

Reif was placed on administrative leave and eventually resigned.

On August 24, Reif pleaded guilty to possession of a controlled substance by misrepresentation, fraud, forgery, and deception or subterfuge. He faces up to four years in prison. A sentencing hearing will be held on November 23.

“We are deeply embarrassed and disappointed with Mr. Reif’s misconduct,” the department said. “The Klamath Falls Police Department does not condone this type of behavior or misconduct by any law enforcement officer. We will continue to hold each other accountable to the highest ethical standards without exception.”