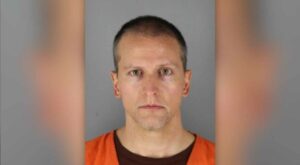 Derek Chauvin is charged with second and third-degree murder and other charges related to the Floyd case.

On May 25, video captured Chauvin kneeling on Floyd’s neck for almost eight minutes.

Three other ex-police officers are charged with aiding and abetting second-degree murder.

All officers have asked for their charges against them to be dismissed.