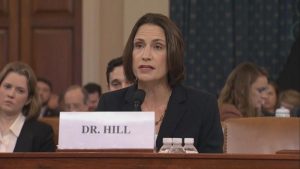 WASHINGTON, D.C. (NBC News) — Testifying on what could be the final day of witness testimony in the House impeachment inquiry, Fiona Hill, the former top Russia expert at the National Security Council, relayed her alarm over Rudy Giuliani’s role in Ukraine policy and his efforts to pressure Ukraine to investigate President Trump’s political rivals.

Hill described Giuliani as pushing Ukraine for an investigation into Burisma, the company whose board included Hunter Biden, the former vice president’s son.
She also criticized the president’s defenders for promoting a false narrative that ukraine interfered in the 2016 election.
“I refuse to be part of an effort to legitimize an alternate narrative that the Ukrainian government is a U.S. adversary, and that Ukraine – not Russia -attacked us in 2016,” Hill stated.

Testifying alongside her was David Holmes, the diplomat who says he overheard a phone conversation where the president asked Ambassador Sondland if Ukraine was going to start the investigations he wanted.