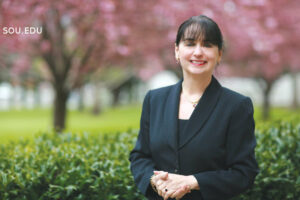 Dr. Mary Cullinan took the helm at SOU in 2006 and stepped down in 2014, moving on to serve as Eastern Washington University’s first female president. She resigned from that position last year.

According to KHQ, Cullinan was on a sabbatical and planned to start teaching EWU students this fall.

Eastern Washington University didn’t release many details about Cullinan’s death but the school did say her family wishes for privacy at this time.