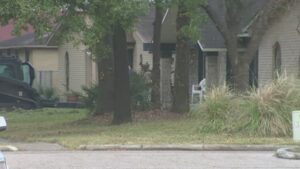 HOUSTON, Texas (KPRC/NBC) – Four people, including a shooting suspect, were found dead at a swat scene in Houston Wednesday morning.

Deputies were dispatched to an east Houston home after they received a call from a woman around 3:15 a.m. saying she had been shot.

When deputies arrived at the scene, they began to approach the residence and an unknown suspect fired at them. The suspect then barricaded himself inside the residence.

Throughout the investigation, deputies learned there were other people in the home.

After hearing a gunshot from inside, deputies gained entry into the home. There, they found two women and two men dead. Deputies believe one of the men was the suspect.

Officials said they tried everything they could to deescalate the situation.

Harris County Sheriff Ed Gonzalez said, “We want them to know above everything that we’re here to try to minimize any consequences or damage or anything like that, but at the end of the day it’s up to the individual to ultimately make a decision of how the situation is going to unfold and sadly he had already made some grave choices.”

Officials believe the 49-year-old suspect was in a relationship with one of the women and that the two other victims may be her adult children.