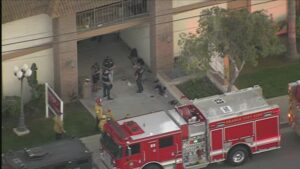 ORANGE COUNTY, Calif. (NBC) – A deadly shooting at a Southern California business complex left four people dead, including a child. One additional victim has been transported to the hospital. The female victim is currently in critical condition.

Lieutenant Jennifer Amat with Orange PD said, “Upon arrival, the officers discovered shots that were actively being fired. Entering the businesses in the area they had discovered 4 victims that are deceased on the location.”

Police have not revealed the names or exact ages of any of the victims.

The shooter, 44-year-old Aminadab Gaxiola Gonzalez, was taken to a local hospital.

Residents nearby say they were shocked by the sound of gunfire as authorities asked them to take cover.

Overnight, California Governor Gavin Newsom tweeted: “Horrifying and heartbreaking. Our hearts are with the families impacted by this terrible tragedy tonight.”

Wednesday’s incident is the third shooting in recent weeks, marking a deadly end to a month consumed by a series of high-profile tragedies.