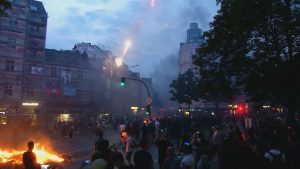 Hamburg, Germany (NBC News) – Violent protests raged into the night in Hamburg, Germany, site of the G20 meetings with President Trump and other world leaders.

Anti-capitalist protesters faced off against police across central Hamburg into the early morning hours of Saturday.

Elsewhere in the city, leaders of the world’s 20 most powerful countries were attending the two-day summit.

People began looting supermarkets and other businesses and torching vehicles on the streets.

Police earlier said at least 196 officers were injured in the clashes.

Authorities detained 83 protesters temporarily at the scene and 19 were taken into custody.