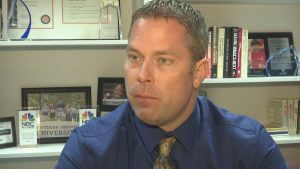 Jackson County, Ore. — Jackson County Commissioners have named Capt. Nate Sickler as Sheriff. Captain Sickler has been serving in the role since former Sheriff Corey Falls stepped down at the end of 2016.

Sickler has been in law enforcement for 19 years, working his way up from a reserve police officer at Phoenix Police Department to captain at the Jackson County Sheriff’s Office.

Sickler’s law enforcement career began January, 1998 when he started as a reserve police officer on a volunteer basis at Phoenix Police Department. In less than two years, Sickler was hired on as a permanent officer. During the same time period, he obtained a Bachelor of Science in Criminology from Southern Oregon University.

Sickler moved in 2002, but he remained in southern Oregon. He served the Klamath Falls Police Department until 2006, rising to the rank of corporal.

Following his tenure in Klamath Falls, Sickler moved to the Jackson County Sheriff’s Office. In his application submitted to the Jackson County Commissioners, he listed some of his core accomplishments as spearheading the Body Worn Camera Program, developing a county-wide DUII awareness campaign and improving training for the employees in his division.

“I am confident I have the skills, the ability, the experience and the temperament to fill the role of Sheriff of Jackson County,” Sickler wrote in his cover letter. “During my career I have been blessed with opportunity and success, non of which I have ever taken lightly. I have always adhered to the principle of collaborative leadership and my reputation for diligence, loyalty, professionalism, and hard work will serve our agency if I am selected for this position.”

Sickler has a wife and two sons and lives in Medford. He will serve as sheriff until the next election in two years.

This is a developing story, check back with NBC5 for updates.