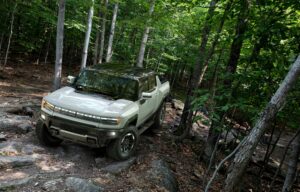 (NBC) — A battle royale is in the offing, with General Motors firing its biggest shot to date at upstart rival Tesla with the debut of its first-ever all-electric pickup, the GMC Hummer EV.

Directly aimed at Tesla’s upcoming Cybertruck, the 2022 GMC Hummer will have “no limits” and “no equals,” the automaker declared in a five-minute webcast reveal. Pushing past the hype, the new Hummer will offer more muscle than any conventional pickup, a whopping 1,000 horsepower and 11,500 pound-feet of stump-pulling torque. But it also will carry the highest price tag of any factory-built truck ever, at around $113,000 for the Edition 1.

The debut model is meant to be “the ultimate expression of performance and capabilities,” GMC brand boss Duncan Aldred told NBC News. He expects it to draw in not only fans of electric vehicles “but people who haven’t thought about electric (who) will be drawn to this vehicle because of what it can do.

There is no question Hummer will be critical for General Motors, which CEO Mary Barra has repeatedly described as being “on a path to an all-electric future.” The automaker plans to have at least 20 electric models in showrooms around the world by 2023, including the Cadillac Lyriq SUV.

But the Hummer could help punch its way into a market where sales have overwhelmingly been dominated by Tesla. Early indications are strong. Following the Tuesday night web intro, Aldred said GMC took enough advance reservations to sell out Edition 1 within 10 minutes. Another 3,000 potential buyers are on a waiting list, and still more making reservations for later versions of the truck. A Hummer SUV also is in the works. 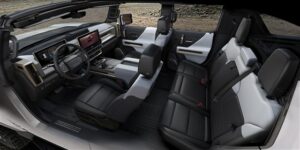 The vehicles will share the same new “architecture,” a flexible platform that will allow for a variety of different battery packs, motor configurations and bodies.

The Hummer will be able to squeeze in a battery pack as large as around 200 kilowatt-hours and the debut model will deliver over 350 miles per charge, said the automaker, though it will be months before the EPA weighs in with an official rating. The truck, meanwhile, will use the all-new GM Ultium battery technology and an 800-volt system that can tap the newest public 350-kilowatt chargers. That will permit a driver to add another 100 miles of range in just 10 minutes. Full charging times have not yet been released.

GMC is playing up the Hummer’s off-road capabilities, including underbody “rock sliders” to prevent damage while crossing rough terrain. The truck will even be able to increase its ground clearance six inches to handle deep water, rocks or ruts. And the three-motor drive system will be able to “crabwalk,” or drive diagonally, whether to simplify parking or maneuver in tough off-road situations. As many as 18 cameras, including some under the body, will help off-road. In urban areas, four-wheel steering will allow the Hummer to turn a circle tighter than a subcompact.

GM is hoping that the Hummer name, once the object of scorn from environmentalists, will now be embraced as eco-friendly.

The pickups share some of the rugged exterior and interior design cues of the original Hummer trucks — a brand GM abandoned after it emerged from bankruptcy a decade ago. But the automaker is betting that a name that was once the object of scorn from environmentalists will now be embraced as an eco-friendly alternative.

While other versions of the Hummer will start at $79,000, the electric pickup segment is soon to get quite crowded. The Chevrolet brand will get one, Ford has an EV version of its F-150 coming and Fiat Chrysler is expected to follow with its Ram brand. Then there are the new entrants. Rivian with the R1T, Bollinger with the B2, the Nikola Badger, and the Lordstown Endurance. And, of course, the Cybertruck — for which Tesla claims it has received so many advance orders it has stopped counting.