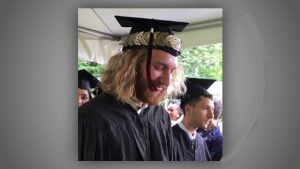 Portland, Ore. – A GoFundMe set up to help support the family of two men who were killed on a Portland Tri-Met bus is quickly approaching its $500,000 goal.

On Saturday, police responded to a gruesome stabbing on a MAX train in Northeast Portland.

Witnesses said before the stabbing, three men tried to calm down a suspect who was directing hate speech at two women on the train who are believed to be Muslim.

The suspect then pulled out a knife and stabbed the men in neck.

Two of the men died as a result of the stabbing, 53-year-old Ricky Best of Happy Valley and 23-year-old Taliesin Myrddin Namkai Meche of Portland.

The Ashland mother of Taliesin Myrddin Namkai Meche posted a goodbye to her son on Facebook.

“Taliesin Myrddin Namkai Meche, My dear baby boy passed on yesterday while protecting two young Muslim girls from a racist man on the train in Portland. He was a hero and will remain a hero on the other side of the veil. Shining bright star I love you forever.”

Nick Zukin, the man who started the GoFundMe, said hopefully the goal is just a starting point.  “They will certainly need more than this. And no amount of money will ever lessen their heartbreak.”

You can visit the GoFundMe page here:  https://www.gofundme.com/tri-met-heroes