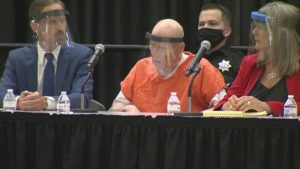 Joseph James DeAngelo Jr. was in court in Sacramento Monday.

The hearing is in a ballroom at Sacramento State University, to allow for social distancing.

DeAngelo was charged with thirteen counts of first-degree murder in five California counties. He is also accused of committing more than fifty rapes in the 1970s and 1980s.

Detectives used DNA evidence to arrest him in 2018.

On Monday, he is pleading guilty to a total of 88 charges in exchange for life in prison, and to avoid the possibility of the death penalty.

Santa Barbara County Chief Deputy District Attorney Kelly Duncan said, “The defendant is admitting to all of the murders alleged against him as first-degree murders. The defendant is admitting to all other charged crimes, and uncharged crimes that can be proven beyond a reasonable doubt, that are known at this time, alleged against him.”

The sentencing is expected to take place in August.