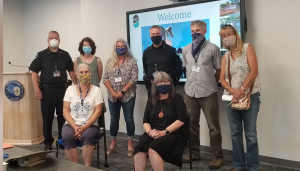 A national outcry for accountability in law enforcement is what led a pair of groups, the Josephine County Democratic Party and ‘Indivisible Southern Oregon’ to meet with police in Grants Pass on Wednesday.

“We just felt that it was important to for us to understand what is happening locally and continue to learn, so the kinds of things we’re seeing nationally don’t become a part of the institute we have here,” said Ventura.

Ventura, who’s a member of both groups, says many of their questions were about use of force policies.

She says they were surprised to learn the department hasn’t use choke holds for several years and has de-escalation training, where police learn non-physical tactics for potentially dangerous situations.

“They make 80 arrests a week, which is a lot, and with that kind of interaction with the community, they have only had 8 citizen complaints in a years time… and that’s fantastic,” she said.

How the department treats citizens of color, was also brought up.

Although both Ventura and the department’s Chief Warren Hensman acknowledge their community is predominately white.

Both say the open, transparent conversation led to a relationship of mutual respect and understanding.

“It’s nice to actually just have an open forum, we brought these folks into our training room and we welcomed our department to them and we just had a nice conversation,” said Chief Hensman.

And it’s something they hope to preserve with additional meetings and discussions in the future.

“We do have a great police department here in Grants Pass and they are very transparent and certainly willing to talk to their community members and I think that’s a take home that everyone across the political spectrum can appreciate,” said Ventura.

Conversations about police accountability have also sparked in Ashland leading to what Chief Tighe O’Meara calls small, but important changes in their policy.

This week, Chief O’Meara says the department modified its use of force policy by changing the word ’should’ to ’shall’ in two sentences.

Chief O’Meara says he didn’t want there to be any ambiguity that an officer has discretion on reporting observed, excessive use of force and the way in which they document legitimate uses of force.