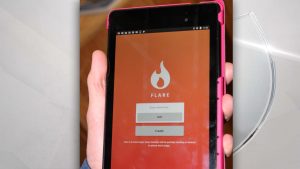 WASHINGTON, D.C. – A Grants Pass High School student is the winner of the 2017 Congressional App Challenge.

The contest is a public effort to encourage kids to learn computer code through competitions hosted by members of Congress for their district.

Congressman Greg Walden announced Monday Grants Pass freshman Tyson Seable won the nationwide competition with hit app, called “Flare.” The app lets users distribute quizzes to friends and fellow-students and provides live results. Seable designed the app for the classroom, but it can be used by anyone who enjoys a challenge.

Congressman Walden personally called Seable at his school Monday to congratulate him. He said, “I applaud Tyson for participating in this nationwide challenge, and commend him on his coding skills and ability to promote Flare in a way that makes people want to try it out,” Walden said. “The Congressional App Challenge allows ambitious students like Tyson to showcase their unique skill set to the country, and is a tremendous resume-builder in the pursuit of a career in computer, math or science fields. I have full confidence that Tyson’s future will be a bright one.”

Flare should be available on in the Google Play store later this month.