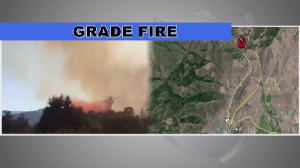 As of 11 a.m. Thursday, that fire had burned 400 acres and was five percent contained.

Multiple homes, outbuildings and cars burned in the fire, which forced the evacuation of hundreds of people and animals. Fire crews hoped to open Highway 263 by noon Thursday, however Hawkinsville Humbug and Rocky Gulch Roads will remain closed as crews deal with downed power lines and debris from burned homes.

Homeowners who lost their homes were being escorted back for a few minutes each Thursday morning. There’s no word when they will be allowed back in permanently.

A shelter is set up at the Siskiyou County Fairgrounds and Rescue Ranch in Yreka is helping care for animals displaced by the fire.