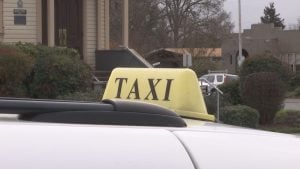 Grants Pass, Ore.– The Grants Pass City held an open workshop today to discuss whether the current taxi and limousine code should be changed to allow companies like Uber and Lyft operate in the city.

In the discussion, councilors listened to some of the issues surrounding ride-sharing, also referred to as transportation network companies, and spoke about how it could be good to have competition for the cab companies while still ensuring there was equal opportunity .

One resident who sat in on the workshop said she has used Uber and Lyft in other cities and was very impressed.

“I found it saved me a tremendous amount of money,” said Arden McConnell. “”The time is really important. Uber is there in three or four minutes.  You can watch them on your computer. It’s actually a part of the 21st century explosion of electronics.”

After Medford allowed TNCs to operate within the city, the city of Grants Pass received an email from Lyft in early December saying it would begin operating there as well. The city soon received reports from taxis that Uber and Lyft were both operating within the city and immediately sent warning notices to the companies saying they must comply with the taxi and limousine code.

City officials describe how both companies discontinued ride service after that with Lyft indicating it would like to resume but at the moment, complying with the current code was burdensome and incompatible with it’s business model.

Some of the preferred changes TNCs would like to see in Grants Pass’ municipal code include eliminating an owner’s license requirement, have licenses be valid from any state rather than exclusively Oregon, tiered insurance and third-party background checks.

Councilor Valerie Lovelace acknowledged during the session she has used Uber and Lyft herself and has enjoyed how quick and cheap rides are. However, she remarked that accommodating everything for the TNCs would not be fair to the cab companies.

“It’s a business model and we need to be fair to both industries. We would like to look at terms of trying to make it a level playing field,” said Councilor Lovelace.

One cab owner who sat in on the workshop said she felt good about the session.

“I feel positive that they’re gonna try and make it a level playing field which I think is only fair for the drivers doing their due diligence here in this town,” said Diane Lowry, owner of Town and Country Taxi.

She felt one discussion the council had in particular would greatly benefit everyone.

The suggestion was to include both local and third-party background checks to ensure that all drivers’ history were inspected under the same light.

Grants Pass Public Safety Chief Bill Landis spoke about how local systems retain more information and criteria such as warnings and at-fault crashes and allows them to decipher those reports before making a determination. Whereas third-party checks “will not do the same scrutinizing that local data and information” like public safety can do.

Still, there is a lot more that needs to be discussed. The council is currently drafting an ordinance which Councilor Lovelace says will take about a month to complete. After which, public hearings will begin so that the council can learn more about the public’s opinion and ultimately come to a final decision.

For Lowry, if the TNCs do ultimately get approved, she believes cab companies can still stay competitive and “continue to offer the best service possible.”