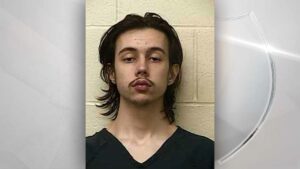 GRANTS PASS, Ore. – A young man was arrested after a shooting and standoff in Grants Pass.

Police said on May 24, there was a fight between 19-year-old Zenobius R. Lyon and his 17-year-old brother at a home in the 500 block of Northwest Butler Avenue. At some point during the altercation, Lyon allegedly used a gun to shoot his sibling. Their father was reportedly injured when he tried to intervene.

As officers arrived at the scene, they found Lyon’s brother outside of the house. He was taken to a Medford hospital to be treated for a non-life-threatening gunshot wound.

The Grants Pass Department of Public Safety said after the shooting, Lyon wouldn’t come out of the home. Officers established a perimeter and used a loudspeaker to urge Lyon to exit the residence.

A SWAT team and negotiators responded to the scene as neighbors were evacuated or told to shelter in place.

After several hours of negotiations, Lyon exited the home and was taken into custody without further incident.

Lyon was booked in the Josephine County Jail for assault and unlawful use of a weapon.