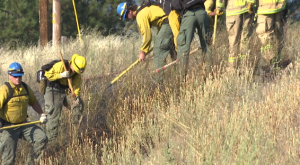 Jackson County Fire District 3 responded to a small grass fire on highway 62 near East Dutton road in White City.
The fire district says  it received a call around 5:40 pm and arrived to the scene just a few minutes later.

The fire was put out after 5 minutes.

No injuries or private property was damaged as cause of the fire.