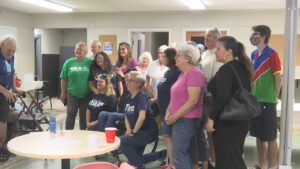 ASHLAND, Ore. —Oregon Democratic Gubernatorial Candidate Tina Kotek was in the Rogue Valley Saturday. The campaign kick-off for the Democratic candidate was designed to encourage voters to get excited about the governor’s race.

Kotek’s team was planning to go door to door, but because of the heat, made phone calls instead. Nurses, educators, and community members all gathered to support the longtime Oregon House Speaker.

“The really key thing is talking to voters over the phone about what’s at stake in this election, there are a lot of big issues in the governor’s race, it’s about how people are feeling about the cost of living, people’s housing costs,  about choice making sure people have access to reproductive health care,” said Kotek.

The election is about 60 days away. Kotek is running against former Democratic State Senator Betsy Johnson, who’s running as an Independent, and former House Minority Leader, Republican Christine Drazen.