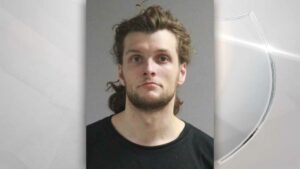 MEDFORD, Ore. – A man pleaded guilty to starting a fire on the Bear Creek Greenway earlier this year.

Police said on May 18, 26-year-old Colin Duff was camping and burning trash in the 800 block of North Riverside Avenue near the creek when the fire got out of control. It threatened a nearby home before it was put out by firefighters.

Duff was arrested for reckless burning in the early morning hours of May 27.