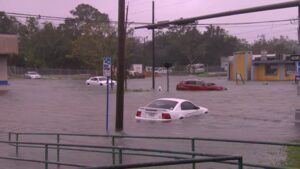 PENSACOLA, Fla. (NBC) – Millions along the Gulf Coast are assessing the damage from Hurricane Sally.

More than a quarter-million people in Florida lost power and officials are already predicting billions in damage.

Thursday morning, there was clean-up efforts and heartbreak. Florida residents are reeling after Sally slammed the coast as a powerful Category 2 hurricane.

The storm dished out a trifecta of strong winds, historic rain and a scary storm surge.

The hurricane toppled trees onto homes, leaving many streets impassable and even ripping apart at least one bridge.

Sally stalled over Pensacola for hours, dumping nearly 30 inches of rain in some areas and devastating business owners, like Pamela Homyak. “It just doesn’t seem real,” she said. “I can’t believe this is happening.”

Her boutique hotel—the “New World Inn”—took heavy damage, and it’s not the first time. Back in 2004, the hotel was battered by catastrophic flooding from Hurricane Ivan. “I thought that was a once-in-a-lifetime storm but the surge… the flooding seems to be almost worse than what we had then.

That surge prompted last-minute evacuations. Among them was boater Wesley Nielsen, who was forced to abandon ship. He said, “I never fool with Mother Nature and I did not expect to tangle with her today but when she was getting the better of me, I gave it to her, she won, I left.”

A small silver lining: Florida Governor Ron DeSantis, incredibly, reported no fatalities from the storm. “But there is gonna be a lot of property damage,” he explained. “When you see downtown Pensacola, and you see three feet of water there, that’s probably gonna effect every business.”

Amidst the chaos, the community is already pitching in. Tim Taylor helped remove a tree that landed on his 91-year old neighbor’s roof. That man is lucky to be alive, moving from the bedroom to the den just moments before the tree crashed through his roof.

At the marina in downtown Pensacola, nearly triple-digit wind speeds and strong storm surge carried some of the boats several hundred yards into a cluster.

There are still 200,000 people in the State of Florida who have no power in their homes at the moment. But with wind conditions calming down, crews are working to fix that.