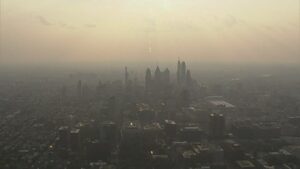 (NBC) Smoke from Western wildfires in the United States and Canada is traveling thousands of miles to bring a haze over New York, Philadelphia and other parts of the Northeast.

The smoke is being spread by a jet stream, making for an especially hazy day Tuesday as Philly warms into the low 90s.

Smoke particles will mix down over the next few days, creating unhealthy breathing air for sensitive groups.

The National Weather Service issued an air quality alert due to the haze. NWS said, “A Code Orange air quality alert means that air pollution concentrations within the region may become unhealthy for sensitive groups.”

The smoky haze is also leading to dramatic sunrises and sunsets.

A cold front sweeping through later Wednesday should clear the smoke from the skies for the rest of the week.