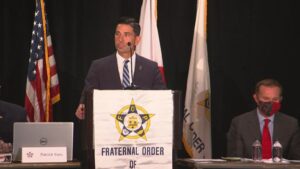 ATLANTIC BEACH, Fla. (NBC) – The head of the Department of Homeland Security is weighing in on the anti-police protests happening in cities across the country.

In a speech in Florida Friday to the Fraternal Order of Police Board of Trustees, acting Homeland Director Chad Wolf spoke about the unrest in cities like Portland, Oregon.

Wolf said, “Some politicians and media figures have brazenly characterized the extreme violence in Portland as ‘mostly peaceful.’ Our constitution protects the natural right of freedom of speech and peaceful assembly. The department supports the exercise of that right and everyone’s First Amendment rights. But there is, however, no constitutional right to loot, to burn, or assault our law enforcement officers or fellow citizens.”