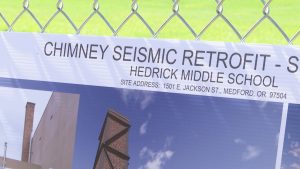 MEDFORD, Ore. — The Vaux Swifts are a special kind of bird that migrates through Oregon every year. During that migration, they stop in Medford at Hedrick Middle School to sleep.

“They have to hang like a bat against a tree or under a crevice or in this case in a chimney,” Rogue Valley Audubon Society President, Carol Mockridge, said.

The birds don’t have any thumbs which makes it hard for them to find places to sleep.

Hedrick middle school has an old chimney that isn’t sealed, so every year they come back to the school.

But the chimney could be in danger.

A statewide initiative requires all Oregon schools to be able to withstand earthquakes. Medford School District has been slowly seismically retrofitting their schools including Hedrick.

As the school undergoes its required upgrades, the district realized the chimney would also need seismically upgraded. However, it would be more cost-effective to tear it down.

“I’m not even going to go there,” Mockridge said. “On my watch, it’s going to be saved.”

The district, Southern Oregon Land Conservancy, and the Rogue Valley Audubon Society are partnering together to fundraise enough money to keep the chimney for the birds, and also make the chimney safe during earthquakes.

“We have two really big events every year, our holiday party and our birdathon,” Mockbridge said. “We’re probably going to have to come up with some more.”

The chimney is an important part of the birds’ migration. The district and the bird conservationist groups know how important it is to keep the chimney.

“They’re very finicky about where they’ll roost so if we have something, we want to keep it,” Mockridge said.

If you’d like to donate, Hedrick Middle School has an account set up. You can give them a call or attend one the fundraisers the Audubon Society is hosting.