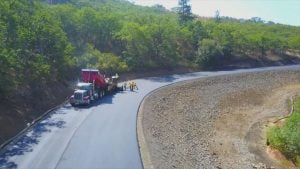 Highway 66, east of Ashland, is now back open following a month of repairs.

The Oregon Department of Transportation was aiming to finish the work before school starts for bus routes and before the winter season begins.

Officials say the area has been a constant problem for decades but with the wet springs we had – the road quickly became a top priority.

“So that’s gonna be a really nice addition to repair that slide,” said Gary Leaming, ODOT spokesperson. “That’s been a chronic slide for us for about 20 years, putting band-aids on it. So now I think we’ve finally got it fixed.”

The highway was closed from late July through August.