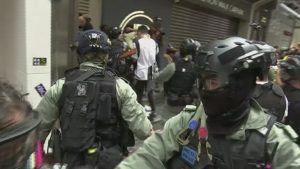 Thousands of protesters defied tear gas, pepper pellets and water cannon to protest against the law.

Beijing approved the controversial measure Tuesday allowing authorities to crack down on what China calls subversive and secessionist activity in Hong Kong.

Many call it China’s boldest step yet to erase the legal firewall between the semi-autonomous territory and mainland China’s authoritarian Communist Party system.

Wednesday was the 23rd anniversary of Hong Kong’s return to China from Britain.

Each year since 2003 the anniversary date has been marked by protests. But this year, on the first day the national security law came into effect, the police refused permission, citing virus concerns and the probability of violence.

They arrested demonstrators on charges including unlawful assembly, possession of weapons and violating the national security law.

Hong Kong citizen April Chan said, “I think mostly it is a feeling of helplessness, but the other one thing is that because the national security law is so broad, that like, whatever you do you will be charged anyway, so I don’t think people should fear too much about it.”

Hong Kong Chief Executive Carrie Lam said, “I would rather not to arrest or prosecute anybody if everybody abides by the law. The purpose of this piece of legislation is not to just punish, it is also to deter, to deter people from committing such serious offenses as secession, subverting the state power, terrorist activities and so on and so on.”

Beijing passed the much-anticipated security law after weeks of uncertainty, pushing China’s freest city and one of the world’s most glittering financial hubs onto a more authoritarian path.