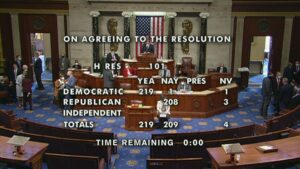 The vote, nearly along party lines at 219 to 209. One Democrat, Jared Golden of Maine, joined Republicans voting “no.”

The Senate passed the resolution in the wee hours of the morning, with Vice President Kamala Harris casting the deciding vote.

will need the time to write the legislation.

The budget committee will then receive it by February 16th and prepare the measure for floor consideration.