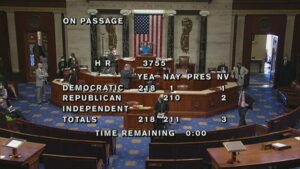 WASHINGTON, D.C. (NBC) – In a mostly symbolic move, the House of Representatives passed legislation Friday that would guarantee a woman’s right to an abortion.

The final vote was 218 to 211, largely along party lines, but there is not much hope for it to clear the evenly divided Senate.

Democrats would need at least ten Republican votes, which is highly unlikely as all Republicans strongly oppose the bill.

Republicans have passed a number of abortion restrictions on the state level including a controversial Texas law that imposes a near-total ban on abortion.