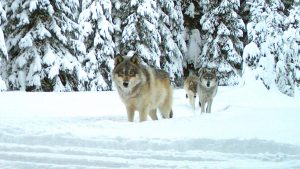 WASHINGTON, D.C. – The U.S. House of Representatives passed a bill that de-lists gray wolves from the Endangered Species Act.

Gray wolves were first federally classified as “endangered” in the 1970s. The federal government worked to re-introduce wolf populations to the western U.S. by relocating wolves from Canada and other areas where they were already established.

The wolf population eventually increased and gray wolves were removed from the endangered species list in 2009 by the U.S. Department of Fish and Wildlife, with special rules for certain geographic regions.

However, the decision was challenged in court. U.S District Judge Donald Malloy eventually ruled Fish and Wildlife made their decision in error. The ruling halted de-listing wolves in all states.

In 2011, Congress stepped in with a funding bill that effectively overturned the court’s decision to return gray wolves to the Endangered Species List. However, the provisions must be passed each year to remain effective.

In Oregon, wolves were delisted as an endangered species under state standards in 2014. However, they are protected by the Oregon Wolf Conservation and Management Plan.

On November 16, 2018, the House passed a bipartisan bill that would officially remove gray wolves from the List of Endangered and Threatened Wildlife, overriding Fish and Wildlife’s rulemaking with a federal law.

The legislation would protect Fish and Wildlife’s original decision to delist from “special interest litigants” and “activist judges,” according to supporters of the bill.

One of those supporters, U.S. Rep. Dan Newhouse (R-Wash.), said in part, “The recovery of the gray wolf is a success story for the Endangered Species Act, and the best available science must determine whether species remain listed. States are best-equipped to effectively manage gray wolves and respond to the needs of the ecosystem and local communities.”

The Wolf Conservation Center is opposed to the bill. In an article, the group stated in part, “In addition to stripping protections for most gray wolves from the federal endangered species list, this bill would preclude judicial review of de-listing actions, thus furthering a damaging trend of Congress undermining the ability of Americans to seek out justice and defend our civil rights, public health, and environment.”

A gray wolf subspecies called the Mexican gray wolf is not affected by the House legislation.

House Resolution 196-180 will now head to the U.S. Senate for consideration.