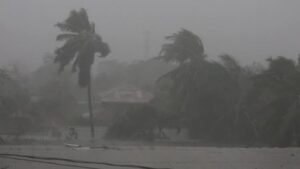 This part of Nicaragua is under a hurricane warning.

Heavy rains thrown off by the Category Four storm already were causing rivers to overflow across Central America.

The storm was forecast to spend the week meandering over Central America, dumping rain measured in feet, not inches.