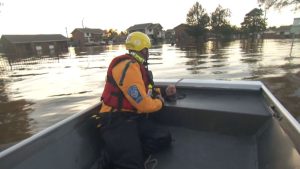 At least 38 deaths in the United States are being blamed on the storm and the flooding that followed.

Hundreds of water rescues have taken place since Saturday, and washed out roads are making it difficult for first responders and emergency personnel to get the help to places where they need.

The American Red Cross has set up more than 60 shelters across eastern North Carolina, and have taken in more than 3,000 people.

Red Cross officials say those shelters will stay open as long as they are needed.