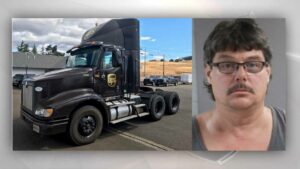 MEDFORD, Ore. – The man who pleaded guilty to shooting at vehicles on Interstate 5 in Southern Oregon will spend the next two decades behind bars.

OSP arrested Roseburg man Kenneth Ayers in August 2020 and said Ayers shot at vehicles while on his route, driving a UPS tractor-trailer, between Jackson and Douglas Counties.

The case baffled police in several counties for months, as the shootings stretched 33 miles on both sides of I-5.

Police said many drivers didn’t realize their car had been shot for days.

One woman was wounded and survived.

During his sentencing hearing, Ayers declined to make a statement.