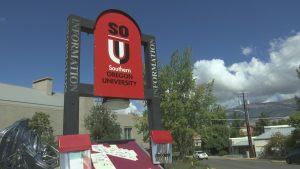 ASHLAND, Ore.– Over a million international students in the United States could be forced out of the country in the coming months.

The looming threat comes after the Trump administration released a new policy this week through ICE. It outlines that any international students studying fully online must leave the country.

For students like 25-year-old Yan Gomberg, coming to the U.S. was always a dream and an opportunity to grow.

“I’ve always wanted to have an experience abroad,” he said. “Plus the idea of being a student-athlete is very unique here in the U.S.”

Gomberg plays for the Southern Oregon University soccer team while also studying for a degree. He says in Brazil you either have one or the other, very rarely do Brazilian kids get a chance to have both. Since 2018, Gomberg has been working to get his degree which he hopes to receive by December.

“Coming back home with an American diploma and an American degree, having this experience of living abroad – that puts you on a different level,” he said.

Universities and defendants of international students argue there’s a great risk by sending them back home from instability, lack of infrastructures to help them get online, and even COVID-19 itself which is continuing to rapidly spread in countries like Brazil.

While this policy is new, ICE has had a long-standing policy preventing foreign students from living in the states while only participating in online education. It was put aside as schools shut down for the COVID-19 pandemic.

Several universities have filed a suit for a temporary restraining order on the policy. But students like Gomberg aren’t feeling positive about their chances. He says if SOU moves to a hybrid model for the fall, with classes offered part-time online part-time person, he may get to stay. That still all depends on COVID-19.

“You bring all these people coming from hot spots, Seattle, Portland – we have a lot of students from those areas – California, Bay Area. I think it’ll be very tricky,” he said.

Gomberg is still holding out hope that something will change in the coming weeks but he’s mostly been left with a mix of feelings and uncertainty.

“It’s just, it’s just cruel you know,” said Gomberg. “I’ve never not paid for school. I’ve never done anything wrong. I feel completely disposable, it’s just so easy for them to say you gotta get out.”