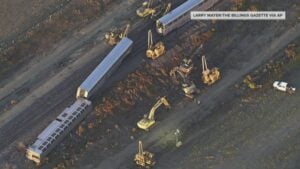 JOPLIN, Mont. (NBC) – Federal investigators continue to comb through the debris field to determine the cause of a deadly train derailment in northern Montana.

Working to piece together the chaotic scene in rural Montana, the NTSB now says the train had multiple mounted cameras that captured before and after the accident.

With the cause still unknown, investigators say the Amtrak passenger train was traveling just under the 79 mile-per-hour speed limit along a gradual curve.

While weather was not likely a factor, the condition of the tracks, which are inspected twice a week by BNSF, may be a critical component.

With nearly 160 people aboard, the train was traveling west with 2 locomotives and 10 cars when five cars suddenly derailed, three plowing off the tracks entirely.

Trever Fossen was driving to a wedding and was the first on the scene. “I do remember seeing people coming out of the top of the train of the three cars further down,” he said. “I just ran up and started helping them help people out of the train.”

The three passengers killed have now been identified: 28-year-old Zach Schneider was with his wife who remarkably survived, and Don and Marjorie Varnadoe, a married couple celebrating their 50th anniversary with a cross-country trip.

The devastating wreck is rattling the quiet town of Joplin as investigators work to make sense of the mangled metal.