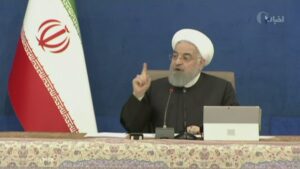 Iran promised Wednesday it would fulfill its commitments under the nuclear deal if the new U.S. administration did so, too.

Iran’s President Hassan Rouhani said if America signs on to commitments under the deal, Iran will follow.

President Joe Biden was vice president when the deal was signed during the Obama administration. He has said he hopes to return the U.S. to the deal.

Tensions between Washington and Tehran have increased since former President Trump’s unilateral withdrawal from Iran’s nuclear deal with world powers.

In the final days of the Trump administration, Tehran seized a South Korean oil tanker and began enriching uranium closer to weapons-grade levels and the U.S. sent B-52 bombers, the USS Nimitz aircraft carrier and a nuclear submarine into the region.